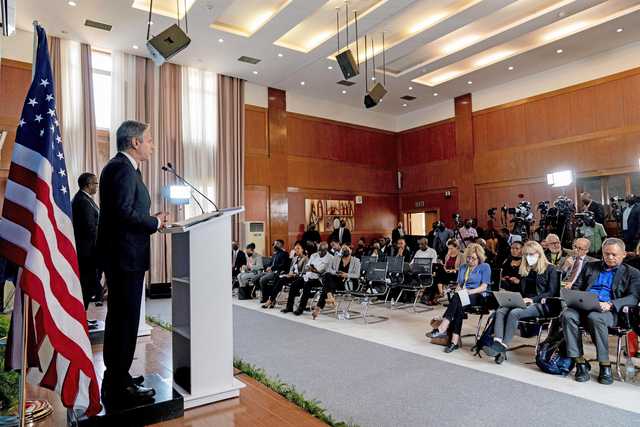 The United States says its future cooperation with Africa will focus on trade and investment to reinvigorate its waning influence on the continent, and is also committed to boosting digital initiatives, tackling climate change, and providing Covid-19 vaccines.

US Secretary of State Antony Blinken unveiled the strategy last week in South Africa during his five-day tour of sub-Saharan Africa that included earlier visits to DR Congo and Rwanda.

Blinken says Africans need to choose their partners wisely because the United States is vying for influence on the continent with Russia and China.

The strategy emphasizes; human rights and democracy; combat terrorism and end armed conflicts; pandemic recovery; hunger and climate change at the heart of the Biden administration’s engagement with the continent.

He added that the United States “will not dictate Africa’s choices, nor should anyone else. The right to make these choices belongs to Africans, and Africans alone.

But on his trip, Blinken played down criticism of the United States that it had ignored Africa for the past decade, lacked a cohesive policy on how to engage the region, and was instead now attached to the relationship to counter the growing influence of Russia and China. African countries are particularly concerned about a bill, the Combating Malicious Activities of Russia in Africa Act, passed by the House of Representatives on April 27, which, if passed by the Senate, will become law. punishing African governments for aiding Russian “maliciousness”. activities on the mainland.

The bill defines such malicious activities as those that “undermine the purposes and interests of the United States” and require the U.S. Secretary of State “…to develop and submit to Congress a strategy and plan for work depicting United States efforts to counter the influence and activities of the Russian Federation and its proxies in Africa.

Although Blinken declined to comment on the bill, he defended the US position, saying his government was not asking Africans to choose but rather “offering a choice”.

On March 2 this year, 28 AU member states voted in favor of a UN resolution condemning the Russian invasion of Ukraine, 17 abstained, eight did not vote and the Eritrea voted against by 141 votes. Four voted against.

While African countries are free to import Russian grain and fertilizer, they risk sanctions if they trade with Russian oil, which remains sanctioned by the United States.

In a separate virtual briefing on Thursday, Molly Phee, assistant secretary of the Bureau of African Affairs, told reporters that the United States had exempted all Russian food products from sanctions because it knew “they were important to many consumers around the world, including those here in Africa. ”

“We seek to deprive Russia of the revenue it derives from oil sales, which it uses to carry out this terrible illegal campaign in Ukraine,” Phee said.

during his tour, South African Foreign Minister Naledi Pandor expressed in a joint press briefing his concern over the US’ attempt to “punish” countries that did not support the West in the Russian-Ukrainian conflict.

“I hate being told, ‘either you choose this, or else,'” Pandor said.