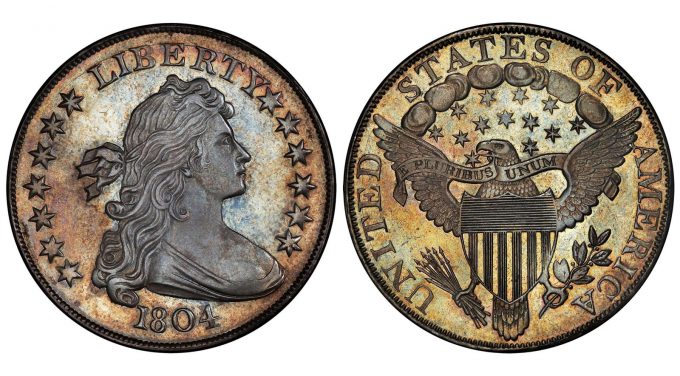 Over $ 31 million worth of American and Americana coins were sold at ANA Stack’s Bowers Galleries auction in August 2021, contributing to more than $ 50 million in realized prices across all product categories. Hosted by Griffin Studios, Stack’s Bowers Galleries’ state-of-the-art auction house in Costa Mesa, Calif., This sale set a record as the most valuable ANA sale in company history for nearly 90 years. .

This record-breaking auction was fueled by numerous individual records in all categories of US coins, highlighted by the Childs-Pogue 1804 Class I Silver Dollar Proof-68 $ 7.68 million (PCGS), the finest example of the “King of American Coins.” This rarity is now the fifth most valuable US coin ever sold and also the second most valuable US silver dollar of all models, ranking behind the 1794 Flowing Hair dollar sold by Stack’s Bowers Galleries during their sale of 2013.

These individual treasures have been donated alongside an array of sophisticated collections that include some of the greatest rarities of the Guide Book of United States Coins. The Castle Pines collection was one of the most important American gold coin cabinets sold in recent years, spanning the first issues of 1795 until the last official releases in 1932.

Outstanding results from this collection include a 1913 Gem Proof Double Eagle which won $ 336,000, setting a record as a Saint-Gaudens With Motto Double Eagle Proof. Additionally, an 1896 Liberty Head Double Eagle Gem Proof set a record for the issue at $ 228,000.

A virtually unprecedented offering of Jefferson Nickels from the George “Buddy” Byers Buckeye Collection has grossed over $ 583,000 and set several records in the process, including $ 33,600 made by a 1969-D Full Steps Nickel Gem and 8,400 $ earned by a Proof-69 DCAM (PCGS) 1959 nickel.

A full selection of Liberty Seated, Barber Coins and First Half Dollars from the Lincoln Square Collection was on display. Highlights included an AU-50 1823/2 quarter from the Eliasberg collection which made $ 96,000 and an MS-61 (PCGS OGH) 1878-S Liberty Seated half dollar which grossed $ 108,000.

The Oregon Collection featured a large selection of fractional gold coins from California that spanned nearly 70 distinct Breen-Gillio varieties and featured many of the best known examples. Records were set by the 1854 Octagonal 25 cents BG-103 which grossed $ 90,000 and the unique 1854-DERI Octagonal $ 1 BG-529A which grossed $ 57,600.

Stack’s Bowers Galleries August auction also featured duplicates of the record-breaking Lulu Collection of Walking Liberty Half Dollars Short Set which made nearly $ 1 million at the June 2021 auction of the society. The August offering alone represented an accomplished collection and included rarities such as a 1942 half dollar MS-68 (PCGS) that fetched $ 25,200 and a CAC MS-67 + (PCGS ) of 1943-S which brought in $ 50,400.

Numismatic Americana also had an outstanding performance in the Stack’s Bowers August ANA sale, crowned with a magnificent “1818” Congressional Gold Medal awarded to William Henry Harrison which sold for $ 600,000, setting a new record as as the most valuable US currency medal. A Franklin Winged Genius bronze medal from 1784 also set a record high of $ 48,000, surpassing what a silver example brought in at the Stack’s Bowers Galleries sale in November 2019.

Those $ 50 million in overall realized prices, including $ 31 million in US coins, represent a 70% increase from the company’s 2019 ANA sales results and more than double the total achieved in August 2020. This incredible growth has undoubtedly been driven by the company’s industry. – Cutting-edge technology, including their state-of-the-art auction gallery at Griffin Studios and their exclusive Coins In Motion animation technology. These advantages, combined with the world’s best numismatic expertise, ensure that Stack’s Bowers Galleries will remain an industry leader for decades to come.

For more information on Stack’s Bowers Galleries record ANA sale in August 2021 or to send your numismatic treasures to a future auction, contact the company at 800-458-4646 or email consign @ StacksBowers. com. Stack’s Bowers Galleries are now accepting shipments for their November auction through September 21, while their monthly Collector’s Choice online auctions provide a convenient place for the fastest sale at the highest prices.

The company is headquartered in Costa Mesa, California, with offices in New York, Wolfeboro, Hong Kong and Paris. Stack’s Bowers Galleries is the official auctioneer for several major numismatic conventions, including the events of the American Numismatic Association, the New York International Numismatic Convention, the Whitman Coin & Collectibles Spring, Summer and Winter Expos, and its auctions of April and August in Hong Kong.