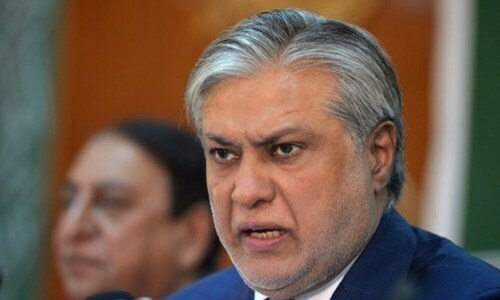 Former Finance Minister Ishaq Dar said on Wednesday that the exchange rate will improve once Pakistan’s economy is headed in the right direction, going so far as to say it could even drop to 160 rupees against the US dollar in a few months when “political fiscal and monetary policies are fixed”.

Dar’s remarks came during the Aaj News ‘Faisla Aap Ka with Asma Shirazi’, where he said that the historical fall of the rupee was due to the “incompetence” of the previous government.

“It’s their incompetence,” he said when asked by Shirazi if the value of the rupee could improve now that the Pakistan Muslim League-Nawaz (PML-N) has taken over.

During its previous tenure, the PML-N gained a reputation for keeping the rupee strong, much to the annoyance of the International Monetary Fund (IMF) and exporters who argued that keeping the currency “artificially strong” hurts the long-term economy. Course.

However, Dar said the dollar cannot be administratively controlled beyond “limited intervention”.

When Shirazi flatly asked him if the rupee could strengthen to 160 against the dollar, Dar replied “it is possible”.

Responding to a question about inflation, which has been in double digits for months, Dar said the government’s giving “carte blanche” to the exchange rate has been the “mother of all evils”.

The exchange rate has been a hot topic in the South Asian economy which saw its currency hit a record high last week when it depreciated to 188.18 rupees against the US dollar. Since then, the rupiah has appreciated for four successive sessions as the market reacted to central bank measures, and clarity on the political front after the vote of no confidence against Imran Khan finally took place on Saturday night. The rupee closed at 181.82 against the dollar on Wednesday, a cumulative gain of 3.5% over the four sessions.

Earlier in the interview, Dar said that the previous government had again brought the current account deficit to a high level.

“We left the current account deficit at around $18 billion. It was high due to capital investment.

“They (the Pakistani government Tehreek-e-Insaf) brought it down but at what cost?

“Pakistani economy experienced negative growth for the first time since 1952. As soon as they started focusing on growth, their current account deficit also started increasing.

“They don’t have any experience. They admitted that we didn’t plan an economic policy.

When asked if he and PML-N leader Nawaz Sharif could return to Pakistan, Dar replied, “That information is correct.”

“A passport is a fundamental right of a person – you cannot cancel it or not renew it. It is a constitutional right.

“My passport, through which I entered the UK, was canceled in 2018. Nawaz Sharif’s passport, which also recently expired, has also not been renewed. In politics, sometimes we stoop to a level where we ignore fundamental rights.

“The passport process will take place. I am trying to move up my medical appointments, as is Nawaz Sharif. In the meantime, if the passports and other travel documents are finalized, we will come back.

“No one could have thought this would happen three months ago. This all happened thanks to the efforts of Nawaz Sharif and the common opposition.

“The country had come to such a situation where it had to happen. It wasn’t done against one man. We were at a crucial moment.”

vote of no confidence

Asked about the start of consultations on the no-confidence vote, a hotly debated issue, Dar said it had been underway for three months.

“We held rallies, but we didn’t threaten them. We didn’t say ‘resign or we will continue to hold rallies’. We wanted to take a constitutional and democratic path. We didn’t want to pressure them.” We didn’t want to use “street politics” either. We had been working there for 2.5-3 months.

“It didn’t work out the way the encryption came on March 7, and we submitted the motion of no confidence on March 8. We met with political parties, completed our numbers and incorporated them. We spoke to PPP which was also It was a tall order since in the history of Pakistan, a vote of no confidence had never been successful.We had to be careful to avoid the embarrassment of a failed vote.

“Encryption has nothing to do with it,” he said, referring to PTI chairman Imran Khan and his party’s claims that encryption was evidence of a Western plot against him, as well as the motivation behind the opposition’s vote of no confidence in parliament.