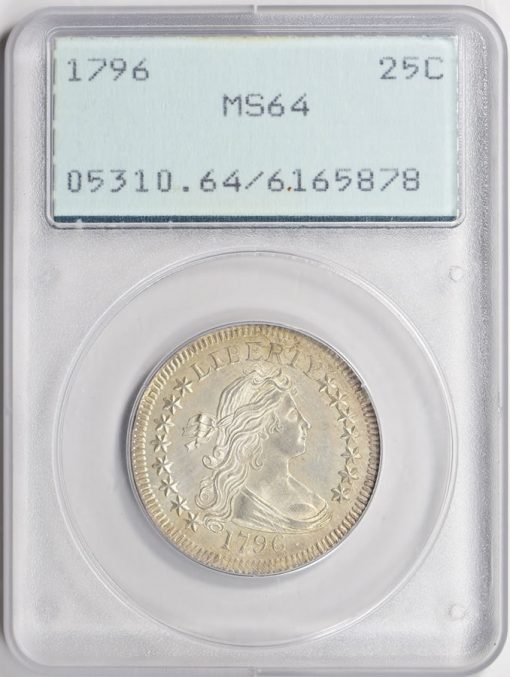 On Sunday, January 19, thousands of collectors, dealers and professionals bid on GreatCollections (www.greatcollections.com), ignoring previous auction records and price guideline values, to compete for perhaps the newest collection of US coins to hit the market in over a decade.

The group of coins, nearly 100 in total, were part of the “ultimate collection”, put away by a single collector 25 to 30 years ago and discovered until the end of 2019. Coins were graded by PCGS and NGC in the early days of coin certification and encapsulation, and several series of rarities had consecutive submission numbers rarely seen on the market today.

Many all-time world records were set and the majority of pieces sold to collectors, including the 1796 Draped Bust Quarter PCGS MS-64. This one-year-old type piece made $303,750, beating 20% off the PCGS price guide value of $250,000, and nearly double the last appearance in the same grade at a public auction, where it fetched $164,500 by another company in 2014.

Another collector won the Best Barber Quarter of 1905 rated MS-68 by PCGS and with CAC approval. After a spirited auction, the coin realized four times the PCGS price guide value of $25,000 and sold for $101,251.

A number of coins have been won by collectors who surface every 5-10 years to add to their collection. One such example was the 1883 Liberty Quarter Eagle PCGS Proof-65, which fetched $45,562, well above the current PCGS price guide value of $29,500. The new owner last purchased a piece in 2012.

Although coins certified by grading services from the late 1980s and early 1990s regularly appear at auction, even today the Ultimate collection stands out for the combination of rarity and superb condition of the coins. .

“It has been a pleasure for us to offer such an original and fresh group of certified coins in our auctions and it proves the immense demand we have for coins of all price ranges,” said Ian Russell, owner/president of GreatCollections.

“Many customers have flown in to our Irvine offices to view this collection, and we’ve been able to take highlights to several major cities to showcase. The result has been a record number of new bidders and, of course, , the many record prices set.”

Highlights of the Ultimate collection:

Other achievements of the January 19 GreatCollections auctions:

GreatCollections is always on the lookout for small and large shipments. To learn more about selling your coins, visit www.greatcollections.com/sale or call 1-800-442-6467.

GreatCollections is an auction house of certified coins and paper money, as well as CAC approved coins, which handles coin/note transactions from start to finish.

For sellers, GreatCollections offers professional imaging for each coin/note, cash advances where applicable, extensive marketing and other one-on-one services not usually available with other auction houses and websites, freeing up the seller to do nothing other than collect the proceeds of the sale.

Buyers profit by entrusting a place whose directors have years of experience in numismatics and whose reputation in the industry is beyond reproach.

Four point club: predicting the next company to join the trillion dollar elite