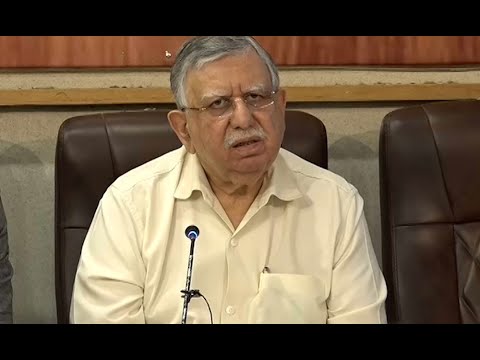 Speculators drive up the value of the dollar: Shaukat Tarin – Pakistan

KARACHI: Former Finance Minister Shaukat Tarin said on Thursday speculators are pushing the dollar rate higher and the greenback is unlikely to rise above Rs185 based on Pakistan’s real effective exchange rate (REER).

The REER is the value of a country’s currency against a basket of currencies of global trading partners. A REER below 100 means that the country’s exports are competitive, while imports are expensive.

According to the latest data shared by the State Bank of Pakistan, the REER fell to 93.57 in May 2022, the lowest level since September 2020. The Pakistani Rupee closed at 207.91 against the US Dollar on Thursday.

The rupee records a marginal gain against the US dollar

“While exporters are the main speculators, the role of foreign exchange firms and banks cannot be ruled out,” he told the Karachi Press Club (KPC).

Meanwhile, commenting on the 90-day performance of the Pakistan Democratic Movement (PDM) government, Tarin said he was driving the country towards default and that “if the current challenges are not resolved, then default will be imminent for Pakistan”.

He was of the view that political instability amid the commodity “supercycle” in the international market could derail the economy.

“Inflation has not peaked yet and it may also reach 50%,” he said, pointing out that wholesale inflation was recorded at 40%, the highest since 1974.

He lamented that the government is abandoning social welfare projects initiated by the Pakistani government Tehreek-e-Insaf (PTI) such as Kamyab Pakistan, Kamyab Jawan and the Mera Pakistan Mera Ghar.

Russia is not Iran and has not been sanctioned. European countries, India, Bangladesh and Sri Lanka buy Russian oil. However, people running business in Pakistan fear repercussions from America: Shaukat Tarin

The former minister also pointed out that the government failed to order fuel deliveries on time and resorted to power shedding to hide its mistake.

He pointed out that urban areas faced 4 to 8 hours of load shedding while power outages in rural areas lasted 8 to 12 hours.

Many coal, RLNG and oil-fired power plants face shutdowns because fuel was not purchased in a timely manner, he said. According to him, the country would continue to face power cuts for the foreseeable future.

Electricity crisis: Pakistan’s LNG demand fails, not a single offer has been received

“The government has chosen to impose load shedding on the people in an effort to save foreign currency by withholding payments from independent power producers,” he added.

He said soaring petrol and diesel prices would affect the cost of public transport, agricultural tube wells, tractors, food and other essentials.

At the same time, borrowing costs for consumer loans have also risen sharply and are expected to rise further, he said. Tarin pointed out that the devaluation of the rupee and the spike in KIBOR rates have increased the cost of doing business.

Factories making textiles, automobiles and cellphones closed and millions of people were laid off as a result, he said.

He further stated that the PTI government did not impose any super tax and did not raise the tax rates.

“Imran Khan reduced the oil tax to zero,” he said.

“GST exemptions have been reintroduced while the removal of the CNIC condition has hit the campaign to document the economy and will encourage the shadow economy,” he said.

He said it was absolutely necessary to broaden the tax base.

“We left a database of 43 million potential taxpayers. However, they are taking the easy way out by taxing existing taxpayers,” he added.

He said the implementation of the track and trace system has visibly slowed down.

Muzammil Aslam, PTI’s spokesperson for economic affairs, said Moody’s rating for Pakistan has remained at B3 since 2015. However, in its latest review, it reaffirmed the B3 rating but changed the outlook from stable. to negative.

The negative outlook is driven by heightened external vulnerability risk and uncertainty about the ability to secure additional external financing to meet its needs.

Pakistan’s external vulnerability risk has been amplified by rising inflation, which is putting downward pressure on the already weak current account, currency and foreign exchange reserves, especially in the context of political risk. and increased social.

“According to news reports, the International Monetary Fund (IMF) has also set four strict preconditions, some of which have existed before and some which are new.

“We think this is probably due to the lack of confidence that has developed recently, especially due to the relaxation of NAB laws and the bad 2023 budget,” Aslam said, referring to Pakistan’s efforts to revive its stalled IMF program.

Aslam said the budget has also not been reconciled.

While talking about buying Russian fuel, Tarin said that Russia is not Iran and has not been subject to any sanctions.

He said there are many factories in the country that could process Russian oil, including Byco’s and Attock’s. In addition, one can buy Russian oil and trade it on the international market to protect against rising prices.

The Ultimate Guide to US Banking Rewards – Forbes Advisor