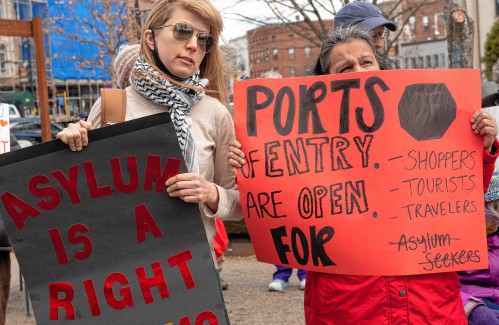 NORTHAMPTON — More than 50 people gathered in Pulaski Park on Monday for a noon protest against Title 42, part of an international day of protests denouncing U.S. immigration policy that allows applicants to be deported. country asylum without a hearing.

The controversial policy implemented under the Trump administration was apparently designed to prevent the spread of COVID-19 by immigrants arriving in the United States from Canada and Mexico. This rationale, according to several speakers at Monday’s rally, is based on racist stereotypes and puts vulnerable people at risk.

Protesters demanded that the Biden administration end the policy immediately.

State Rep. Mindy Domb, D-Amherst, addressed the crowd and asked a young woman to bring her handmade sign closer so she could read it aloud.

“‘Gateways for shoppers, tourists, travellers, but not asylum seekers,'” Domb read. “Over the past two years, more than 1.5 million people have been turned away because of Title 42. … It’s based on stereotypes that people who don’t live in the United States, especially people from ‘Latin America and South America, are vectors of disease, somehow dirty and will make our society bad. This is wrong.’

Prior to Title 42, asylum seekers were either detained or released in the United States while their cases were heard. Domb said progress in managing the spread of COVID-19 has made it clear that the stricter policy is not scientifically necessary.

“There is no need to hide racism behind public health,” Domb said. “As a second-generation American Jew, I wouldn’t be here” without the United States offering asylum to immigrants. She noted that the same stereotypes she blames for Title 42 were partly responsible for the historical persecution of European Jews.

Shel Horowitz, a member of Western Massachusetts Jewish Immigration Justice Activists, said the rally was held in conjunction with about 40 other migrant-led actions across the country to mark the second anniversary of the Title 42. Similar protests were planned on the Mexican side of the border as well, he said.

Jews have spent their history “often being refugees, often being stateless, often being the people no one wanted,” Horowitz said. “Jews were turned back at borders, including the United States, and sent to die in Europe. … We take the mandate to welcome foreigners seriously.

“It’s true that we talk about opening our doors to fleeing Ukrainians, and we tried to bring in Afghan refugees,” but there is a backlog of 42,000 applicants in Afghanistan alone, Sabadosa said, emphasizing the urgency and frequency of asylum applications. requests. “We are pushing people back to our borders when we argue that other countries should let them in.”

Célestin, an asylum seeker from Rwanda who said providing his last name could put him at risk, is training as an accountant while awaiting work authorization. He spoke on behalf of the Vermont-based Community Asylum Seekers Project. He said Title 42 is “unlawful” under international law and “against human rights.”

“I fled my country because I was persecuted by the leaders of my country,” Celestin said. “The only thing I wanted was to protect my life, to choose a country where I would be safe. … Here, I feel safe, and I would like this government to give opportunities and chances to all refugees to be free and to enjoy life. The first human right is life.

Representatives for U.S. Senator Edward Markey, D-Mass., and U.S. Representative Jim McGovern, D-Worcester, read the statements. McGovern District Representative Koby Gardner-Levine called Title 42 “odious” and “one of the cruelest policies of the Trump era,” and said the congressman wrote to the Centers for Disease Control to urge them to cancel it.

“Since then, the United States has carried out more than 1.7 million deportations, denying people the right to seek asylum. The devastating impact put lives at risk,” the agency tweeted.

Brian Steele can be contacted at [email protected]