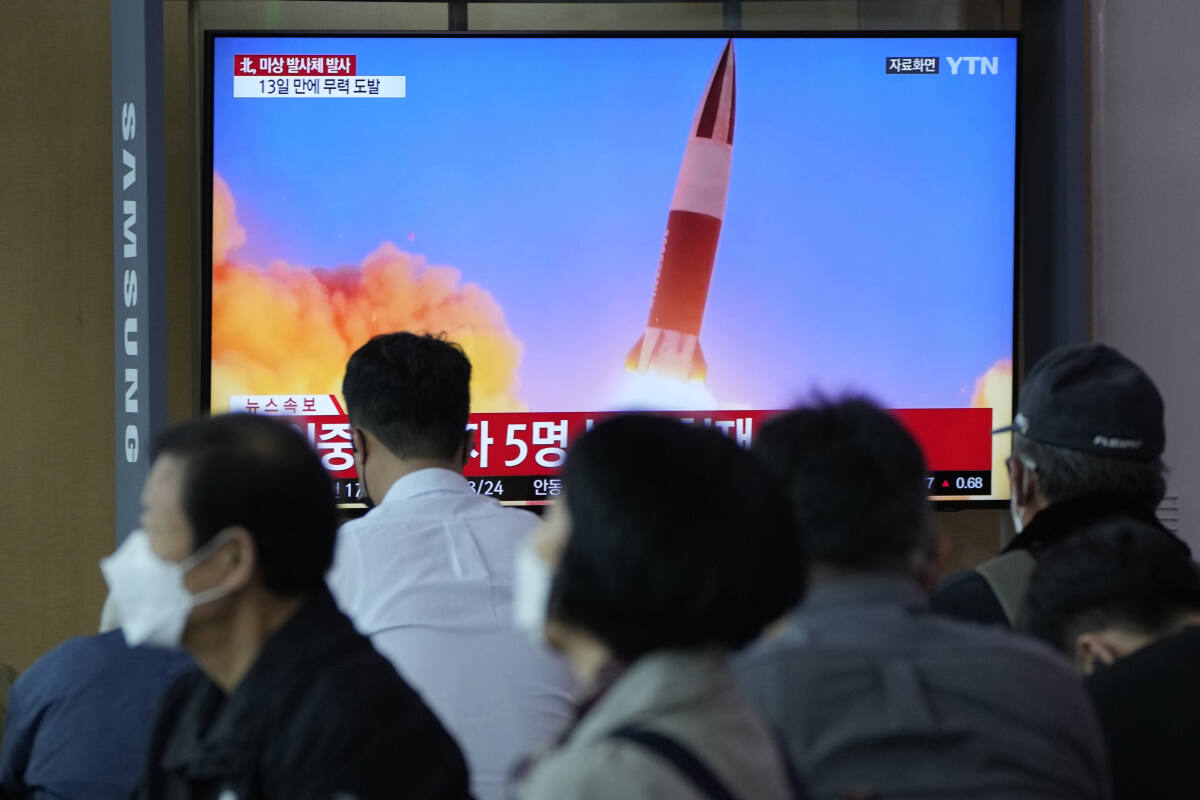 SEOUL, South Korea — North Korea fired a short-range missile into the sea on Tuesday around the same time its UN diplomat decried the United States’ “hostile policy” against it, in a apparent return to its tendency to mix demonstrations of arms with peace overtures to wring out concessions.

The launch, its third round of weapon launches this month, came just three days after North Korea repeated its offer of conditional talks with South Korea. Some experts say the latest missile launch was likely meant to test South Korea’s response, as North Korea needs Seoul to persuade Washington to ease economic sanctions and make other concessions.

At an emergency meeting of the National Security Council, the South Korean government expressed regret over what it called “a short-range missile launch” by the North. The South Korean military said earlier that the object fired from the mountainous province of Jagang in northern North Korea flew into waters off the North’s east coast. Other launch details were being analyzed.

The U.S. Indo-Pacific Command said the launch posed no immediate threat, but pointed to “the destabilizing impact of (North Korea’s) illicit weapons program.” Japanese Prime Minister Yoshihide Suga said North Korea had fired “what may be a ballistic missile” and his government had increased vigilance and surveillance.

A ballistic missile launch would violate a UN Security Council ban on North Korean ballistic activities, but the council does not generally impose new sanctions on North Korea for short-range weapon launches.

The launch came after Kim Yo Jong, the influential sister of North Korean leader Kim Jong Un, contacted Seoul twice on Friday and Saturday, saying her country was open to resuming talks and reconciliation steps if the conditions are met. She slammed Seoul for calling Pyongyang’s previous missile tests a provocation and demanded it abandon “unfair double standards” and “hostile policies”.

Its opening followed the North’s two previous rounds of missile launches this month – the first with a newly developed cruise missile and the other with a ballistic missile fired from a train, a new launch platform. These launches demonstrated North Korea’s ability to attack targets in South Korea and Japan, two key US allies where a total of 80,000 US troops are stationed.

Tuesday’s launch “was like testing the South Korean government to see if it would impose a double standard and call it a provocation,” said analyst Shin Beomchul of the Seoul-based Korea Research Institute for National Strategy. . He said North Korea’s status as a nuclear state would be enhanced if South Korea and others did not respond strongly.

Kim Dong-yub, a professor at the University of North Korean Studies in Seoul, said North Korea may have tested a new missile such as a hypersonic glider vehicle that was part of a range of high-tech weapons. technology that Kim Jong Un has pledged to procure.

South Korea called Kim Yo Jong’s openness to the talks “meaningful”, but urged North Korea to restore communication channels before talks between the rivals could be arranged.

Inter-Korean lines of communication have been largely inactive for about 15 months, so their restoration could be a yardstick for judging the seriousness of the North’s offer. Seoul’s unification ministry said on Tuesday that North Korea remained unresponsive to South Korea’s attempts to exchange messages over the channels.

Around the same time as Tuesday’s launch, North Korean Ambassador Kim Song used his speech on the final day of the UN General Assembly’s annual high-level meeting to justify his country’s development of a “war deterrent” to defend against American threats.

“The possible outbreak of a new war on the Korean Peninsula is contained not because of US pity for the DPRK, but because our state is developing a reliable deterrent that can control hostile forces during an attempted military invasion,” Kim said. DPRK refers to the Democratic People’s Republic of Korea, the official name of North Korea.

Kim Yo Jong’s offer of conditional talks was a response to South Korean President Moon Jae-in’s renewed calls for a political declaration to end the 1950-53 Korean War, which ended in an armistice. , and not by a peace treaty, leaving the peninsula in a technical situation. state of war.

The three-year conflict pitted South Korea and US-led UN forces against North Korea and China and killed between 1 and 2 million people. In his own speech at the UN last week, Moon proposed that the end-of-war declaration be signed between the two Koreas, the United States and China.

After the North’s launch on Tuesday, Moon ordered officials to thoroughly review its latest weapons firings and previous outreach before formulating countermeasures, according to Moon’s office.

A US-led diplomatic effort to convince North Korea to give up its nuclear weapons in exchange for economic and political benefits has stalled for 2½ years. U.S. officials have repeatedly expressed hope for further talks, but also made it clear that long-term sanctions on North Korea will remain in place until the North takes concrete steps toward denuclearization.

While North Korea has tested short-range weapons and pledged to continue building its nuclear arsenal, Kim Jong Un has maintained a moratorium on testing longer-range weapons capable of reaching the American homeland. , an indication that he wants to keep the chances of future diplomacy with the United States alive.

Associated Press writers Kim Tong-hyung in Seoul, Edith M. Lederer at the United Nations and Mari Yamaguchi in Tokyo contributed to this report.