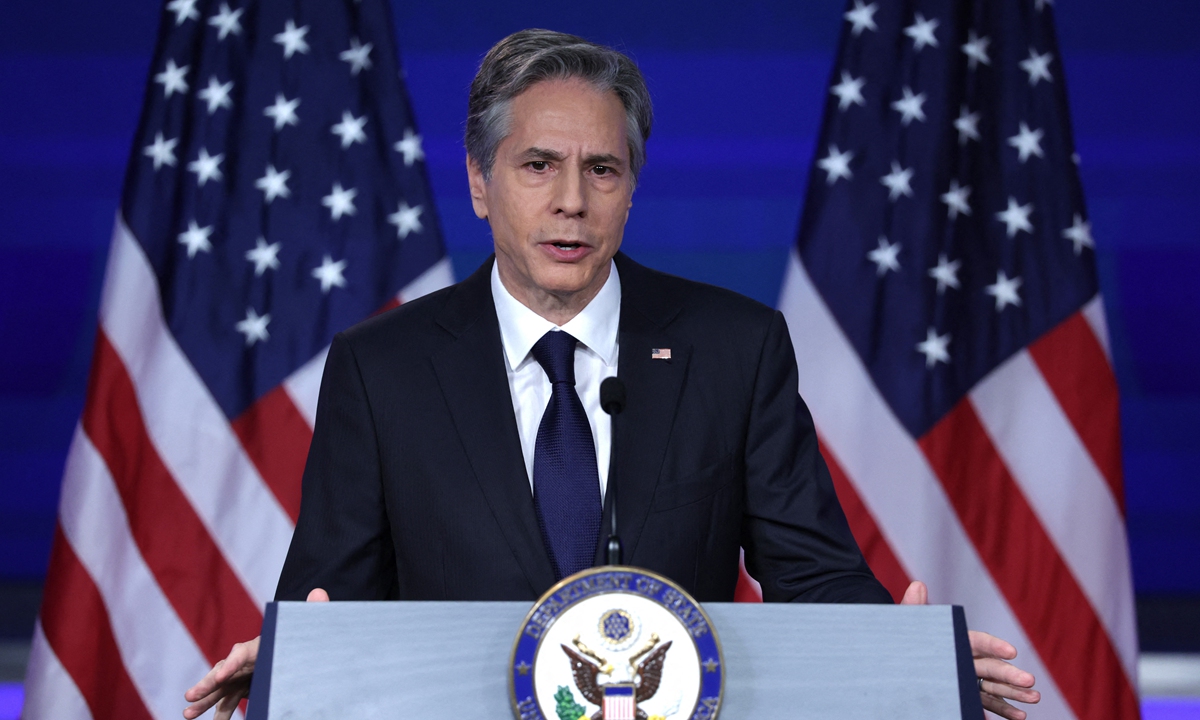 US Secretary of State Antony Blinken speaks on China at the Jack Morton Auditorium at George Washington University May 26, 2022 in Washington, DC. Photo: AFP

US Secretary of State Antony Blinken delivered his long-awaited policy speech on China on May 26. The speech sparked heated debate in Chinese academic circles. Some scholars said the speech had positive aspects. For example, Blinken said the United States was not “seeking conflict or a new Cold War” with China and showed respect for China’s “extraordinary influence.” But more scholars viewed the speech as a reflection of the hypocrisy and malevolence of the Biden administration’s China policy.

The current US administration is good at making resounding remarks. It places extremely high values ​​on democracy, freedom and human rights. In its diplomatic activities, the Biden administration has been soft. But the Chinese believe that actions speak louder than words – beautiful rhetoric cannot hide the ugliness of actions.

Blinken mentioned a new approach they call “built-in deterrence,” showing that the United States has never slowed down its pace to strategically contain China. According to a report published by the Chongyang Institute of Financial Studies of Renmin University of China in late May, from February to May 16, the United States has embarked on 24 measures to suppress China in the fields of economics. , trade, finance, ideology, military. science and technology, and geopolitics.

The strategic competition of the United States with China has gradually taken on a global and multilevel dimension. Based on the continuous pressure exerted on China in the fields of economy, trade and finance, more ideological factors have been incorporated in the name of “comprehensive deterrence”, but in reality it is of great encirclement and repression.

The pattern of strategic competition of the United States with China since 2022 can be summed up in five points: accelerate the construction of an “Indo-Pacific economic and trade circle” that encircles China; put financial pressure on Chinese companies; smear China ideologically; provoke the Taiwan question with the means of “salami slicing”; and constantly suppressing China’s development in military science and technology.

The most vicious of these ruses concerns Taiwan, with Biden’s rhetoric in Japan stating that the United States would help defend Taiwan, which aims to encourage Taiwanese independence and then goad the mainland into attacking the island. In this scenario, the United States could use the same tactics it used in Ukraine to deal with Russia on the Chinese mainland. At that time, the Chinese will kill each other, while the United States will reap the benefits.

In fact, American exaggeration of the “China threat” theory endlessly demonstrates a lack of self-confidence. Right now, no country can threaten the United States or dictate what the United States says and does. US military spending is 40% of the world total. The US dollar accounts for 60% of world reserves. The United States is the largest economy in the world. The power of China is still far from that of the United States.

If the United States hopes to imagine an external threat and strengthen national unity by treating China as an enemy just like Hollywood movies do, then for some time in the future the only factor that will affect China-US relations will be the changes in China. – Economic power of the United States.

With the gradual narrowing of the economic gap between China and the United States, China will gain the upper hand over the United States in the competition. The stronger China is, the more stable China-US relations can be.

It is impossible for China to succumb to the United States. As the Biden administration still believes that competition is the main axis of China-US relations, its basic thinking, strategy and firm stance towards China will remain unchanged in a short time. In this case, the probability of an all-out confrontation between China and the United States increases.

Now it seems that we must adapt to the new normal of tensions, halt the trend of decoupling while preventing an all-out military confrontation. Otherwise, our generation will probably be trampled on by history in the future.

The author is a professor and executive dean of the Chongyang Institute of Financial Studies, Renmin University of China. [email protected]