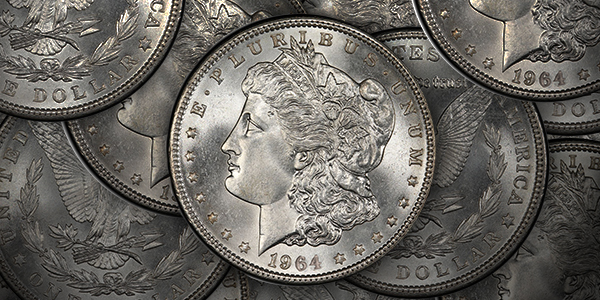 Does a 1964 Morgan silver dollar exist?

Rumors have long been circulating in numismatic circles about the mystery of the 1964 Peace Dollar, which would have been the last 90% silver dollar minted for circulation. That is, if the entire mintage had not been melted down when the plan to mint new silver dollars (which had not been produced in the United States since 1935) was abandoned.

Today, new revelations emerge on a hitherto unknown subject – the 1964 Morgan dollar. Could it exist?

The answer will come when Whitman publishes the latest (fifth) edition of Q. David Bowers Guide to Morgan Silver Dollars at the end of next month. Numismatic news was buzzing with the discovery that the US currency dies apparently prepared for a 1964 Morgan silver dollar.

Previously, it was known that more than 300,000 silver peace dollars had been minted with the date of the year 1964 by the Denver Mint in 1965. Legislation the previous year had authorized the minting of new silver dollars – 45 million of them. However, because the plan was scrapped, the entire mintage of 1964 peace dollars was melted. According to red book“None have been preserved or put into circulation.”

The story of the elusive 1964 peace dollar has been known for decades. Of course, there are still doubts that the 316,076 coins were melted down, and some collectors still speculate that such a rarity has been found. The subject of a 1964 Morgan dollar, however, was not considered a possibility until this news broke. It is widely touted as a “numismatic bomb”, and rightly so.

The possibility of a 1964 Morgan dollar stems from the discovery of hubs, dies and patterns for this previously unknown coin (both obverse and reverse) at the Philadelphia Mint last summer. Similarly, although much less surprisingly, the hubs and dies of the 1964 Peace Dollar have also been found. Unfortunately, no real coins were found.

The telltale 1964 Morgan silver dollar may have met the same fate as its Peace dollar counterpart. It remains unclear if any of these coins were actually issued (and subsequently destroyed) or if the dies and hubs discovered at the Mint were simply never officially used.

Over the years, many enterprising criminals have produced fakes of the 1964 Peace Dollar in order to dupe excited collectors. Beware of the same tricks used now as this story about the possible 1964 Morgan dollar makes the rounds.

The opinions and forecasts contained herein are furnished for informational purposes only and should not be used or construed as an offer, solicitation or recommendation to buy or sell any product..