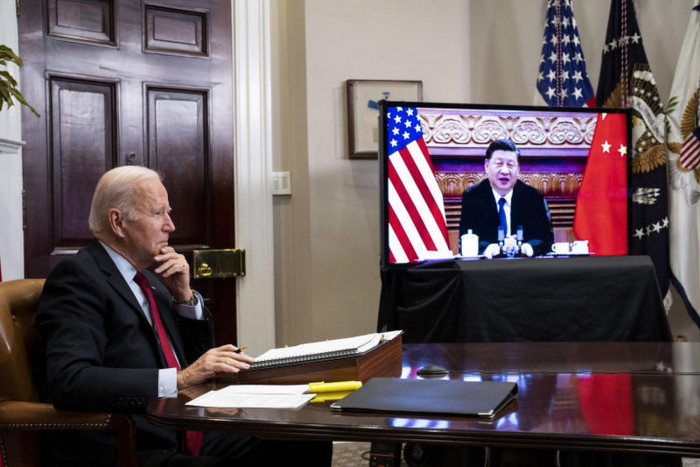 Biden sparks further confusion over US policy on Taiwan

NEW YORK (Reuters) – President Joe Biden has rekindled confusion over his administration’s approach to Taiwan hours after a long virtual summit with Chinese leader Xi Jinping, providing a first test of whether countries can overcome the problem after a generally positive meeting.

Speaking to reporters in New Hampshire on Tuesday, Biden said Taiwan “makes its own decisions” and the autonomous island is “independent.”

Hours later, Biden returned to the issue, declaring “we are not promoting independence” and again stressing that the historic United States policy towards island democracy remains in place.

“We’re not going to change our policy at all,” Biden told reporters. “We encourage them to do exactly what the Taiwan law requires,” he added, apparently referring to the Taiwan Relations Act which governs US policy.

Biden’s choice of words is likely to sound alarm bells in Beijing, which views Taiwan as part of its territory and has threatened to invade it if it seeks independence. Biden had previously assured Xi during their talks that he supported a “one China” policy and that he would not change US strategy, according to a White House statement.

The delicate diplomacy surrounding US-Taiwan-China relations is similar to the exquisite choreography of Israeli-Palestinian relations. But along with the United States and China, the world’s two largest economies are involved.

For decades, American policy has been guided by a body of diplomatic agreements, including the Taiwan Relations Act of 1979 and other agreements that form the foundation of U.S.-China relations.

As part of the United States’ “one China policy”, Washington views Beijing as “China’s only legal government” without clarifying its position on Taiwan sovereignty. Supporting Taiwan’s independence would be at odds with these agreements, even if US policy allows arms sales to the island. to promote self-defense.

Some on the political right praised Biden for being more direct about U.S. support for Taiwan, but back and forth comments made it difficult to discern whether there is a specific strategy at play or whether the controversy stems from it. ‘poor communication.

The president told Xi on Monday that the United States opposes any unilateral effort “to change the status quo or undermine peace and stability across the Taiwan Strait” – comments directed at China after stepping up flights military personnel in the island’s air defense identification area in recent times. month.

Biden also reminded Xi in summit talks on Monday that he had voted as a senator to support Taiwan’s self-defense when the two discussed the island, National Security Advisor Jake Sullivan said on Tuesday.

â€œThe two leaders have spent a lot of time on the Taiwan issue,â€ Sullivan said at a Brookings Institution event on Tuesday. Chinese readings from Monday night’s leaders’ meeting indicated that Biden was opposed to Taiwan’s independence and said Xi had warned that those playing with fire around Taiwan “will inevitably burn themselves.”

The president told a CNN town hall last month that the United States will defend Taiwan if the island’s status quo is unilaterally changed, even though the United States has deliberately never said whether it will use its military in Chinese attack case. Hours later, the White House said Biden had only reiterated a long-standing and still unchanged policy.

It was not immediately clear how the president’s comments would be received in Beijing. U.S. officials said the 3.5-hour discussion between Biden and Xi on Monday evening was frank and respectful.

â€œIt was a good meeting,â€ Biden said. â€œWe’ve got a lot of follow-up, we’ve got four groups in place, we’re going to bring our people together on a whole range of issues. I will have more to report to you in the next two weeks.

As expected, the conversation between Biden and Xi focused on defining the rules of engagement between the world’s two largest economies, with the aim of avoiding military conflicts or unintentional economic damage.

The leaders also discussed how their countries “can work together to ensure that the global energy supply and price volatility do not jeopardize the global economic recovery,” Sullivan said. â€œThe two presidents have instructed their teams to coordinate quickly on this issue. ”