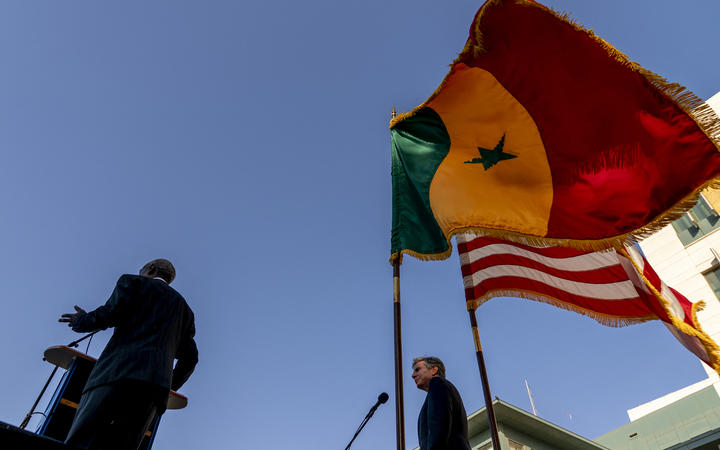 Antony Blinken: What We Learned From America’s New Africa Policy

Through Anne Soy for the BBC.

There is a noticeable shift in the way the United States sees and talks about Africa, if we go by the speech of US Secretary of State Antony Blinken. He spoke of partnerships and avoided the condescending speeches of the past. The statement by the US foreign minister that “Africa is the future” indicates that the continent can no longer be ignored.

Secretary of State Antony Blinken (right) watches him as he is introduced by US Ambassador to Senegal Tulinabo Mushingi (left) as he greets employees and their families at the U.S. Embassy Dakar, November 20.
Photo: AFP

Africa is the youngest continent in the world, it is estimated that by 2050 one in four people in the world will be African. This demographic dividend will shape global affairs for decades to come, but many challenges remain.

The United States’ trade with Africa – 54 countries – represents less than 2 percent of its total foreign trade.

It is also dominated by oil exports, particularly from Nigeria, where Blinken announced the US administration’s policy for the continent.

He praised the Prosper Africa program, launched by the previous US administration, which “aims to increase trade and investment in both directions”.

There have been previous offers to do this, most notably through the Clinton-era Africa Growth and Opportunity Act.

Agoa, as it is more commonly known, grants preferential access to a number of developing countries to the US market.

It was aimed at boosting the economies of countries that were being sidelined from the lucrative US market by bigger players. But there are concerns that it has failed to deliver for the most part.

In the case of clothing, while industries have been established in African countries like Ethiopia and Kenya where tens of thousands of locals are employed as tailors, most fabrics are imported from China where they are produced. cheaper.

So there was little or no impact on the textile industry, or in agriculture where raw materials would be purchased.

The African market, while vast, is also disjointed from country to country, with significant challenges in infrastructure, logistics and pricing.

The African Continental Free Trade Area was created and championed by the African Union to remove these obstacles.

Blinken said the United States welcomes the trade deal and works to ensure that African countries take full advantage of it: “We want to see Africa’s economic powerhouse in the world grow.

He also announced that the United States aims to “help bridge the global infrastructure gap” through the global Build Back Better initiative.

China is already a major player in infrastructure development in Africa, and the Trump administration’s stated African policy was against China on the continent.

“Our African policy is about Africa, not China,” Blinken told me.

But in his speech, he seemed to deal a blow to the Chinese model: “Too often, international agreements on infrastructure are opaque, coercive, weigh on countries with unmanageable debt, are destructive of the environment and do not always benefit. to the people who actually live there. “

He said the United States was going to do things differently.

The second priority highlighted by Blinken was the fight against the Covid-19 pandemic.

Kenya, her first stop on her first tour of Africa, is the first country on the continent to join the initiative.

However, the initiative falls short of the expectations of health advocates on the continent.

They called for the release of intellectual property rights by manufacturers so that developing countries can mass produce doses of vaccines to satisfy their populations.

So far, a number of African countries have obtained the right to ‘finish and fill’, which essentially involves the final processes and the packaging of the doses.

Africa has the lowest vaccination rate of any continent, with just 6 percent of Africans fully vaccinated at the end of last month, according to the World Health Organization. In comparison, the US CDC reports that more than 58 percent of the US population is fully vaccinated.

The African continent was cited as the most vulnerable to the effects of climate change while contributing the least.

The United States says it is investing in global climate adaptation projects, for which it plans to allocate US $ 3 billion (£ 2 billion) each year by 2024.

The Obama-era Power Africa, which emphasizes connecting people to the grid, continues to place a strong emphasis on renewable energy.

“We have connected more than 25 million homes and businesses across the continent to electricity, 80% of which are based on renewable energy,” said Blinken, adding that the United States was involved in the development of what is billed as Africa’s largest solar farm, a collaboration between Botswana and Namibia.

This will be in addition to the increase in solar and wind farms that are popping up across the continent.

“A global democratic recession” was another major topic of discussion during Blinken’s visit.

In a rare acknowledgment from a US official, he spoke of the United States’ own vulnerability to the challenges of democracy, apparently referring to the tumultuous transition of the Trump administration.

It’s a major change in tone from previous U.S. officials who often played the role of the stern big brother – scolding a younger brother with a finger.

Africa has seen more coups this year than in recent decades. In Mali, Guinea and now Sudan, the military has taken power. But there have also been peaceful and democratic transitions in Zambia – to an opposition leader – and in Niger.

Blinken denounced the growing use of technology by authoritarian rulers: “As we debate how to govern the use of technology to ensure that it strengthens democracies – not undermines – the choices that governments make, the industries and innovators doing here will affect the rights and freedoms of people all over the world. for a long time.”

Discussions during the Secretary of State’s African tour focused on peace and security, from the Horn of Africa to the Sahel. This is undoubtedly a growing challenge linked to political stability as well as climate change.

The new United States policy for Africa builds on the continuity of previous administrations, but places more emphasis on equal partnership.

“Too many times African countries have been treated as junior partners – or worse – rather than equals,” he said.

But it remains to be seen whether this equality will actually be achieved.

However, coming from the Trump administration which seemed indifferent to Africa, applied budget cuts to programs on the continent and with the former president himself describing his countries in derogatory terms, this will undoubtedly be a shift in focus. welcome position.

This is in part a reflection of what the Biden-Harris administration values.

But, to a greater extent, Africa is becoming increasingly difficult to ignore.

All predictions point to a continent that will play a growing and influential role in the global economy, security and politics.